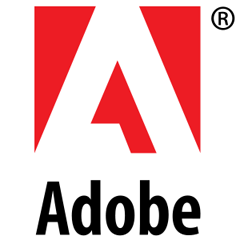 Adobe’s first products after PostScript were digital fonts, which they released in a proprietary format called Type 1. Apple subsequently developed a competing standard, TrueType, which provided full scalability and precise control of the pixel pattern created by the font’s outlines, and licensed it to Microsoft. Adobe responded by publishing the Type 1 specification and releasing Adobe Type Manager, software that allowed WYSIWYG scaling of Type 1 fonts on screen, like TrueType, although without the precise pixel-level control. But these moves were too late to stop the rise of TrueType. Although Type 1 remained the standard in the graphics/publishing market, TrueType became the standard for business and the average Windows user. In 1996, Adobe and Microsoft announced the OpenType font format, and in 2003 Adobe completed converting its Type 1 font library to OpenType.

In the mid-1980s, Adobe entered the consumer software market with Adobe Illustrator, a vector-based drawing program for the Apple Macintosh. Illustrator, which grew from the firm’s in-house font-development software, helped popularize PostScript-enabled laser printers. Unlike MacDraw, then the standard Macintosh vector drawing program, Illustrator described shapes with more flexible Bézier curves, providing unprecedented accuracy. Font rendering in Illustrator, however, was left to the Macintosh’s QuickDraw libraries and would not be superseded by a PostScript-like approach until Adobe released Adobe Type Manager.

In 1989, Adobe introduced what was to become its flagship product, a graphics editing program for the Macintosh called Photoshop. Stable and full-featured, Photoshop 1.0 was ably marketed by Adobe and soon dominated the market.

In 1993, Adobe introduced PDF, the Portable Document Format, and its Adobe Acrobat and Reader software. PDF is now an International Standard: ISO 32000-1:2008. The technology is adopted worldwide as a common medium for electronic documents.

Arguably, one of Adobe’s few missteps on the Macintosh platform was their failure to develop their own desktop publishing (DTP) program. Instead, Aldus with PageMaker in 1985 and Quark with QuarkXPress in 1987 gained early leads in the DTP market. Adobe was also slow to address the emerging Windows DTP market. However, Adobe made great strides in that market with the release of InDesign and its bundled Creative Suite offering. In a failure to predict the direction of computing, Adobe released a complete version of Illustrator for Steve Jobs’ ill-fated NeXT system, but a poorly-produced version for Windows.

Despite these missteps, licensing fees from the PostScript interpreter allowed Adobe to outlast or acquire many of its rivals in the late 1980s and early 1990s. In December 1991, Adobe released Adobe Premiere, which Adobe rebranded to Adobe Premiere Pro in 2003. In 1994, Adobe acquired Aldus and added Adobe PageMaker and Adobe After Effects to its production line later in the year; it also controls the TIFF file format. In 1995, Adobe added Adobe FrameMaker, the long-document DTP application, to its production line after Adobe acquired Frame Technology Corp. In 1999, Adobe introduced Adobe InCopy as a direct competitor to QuarkCopyDesk.